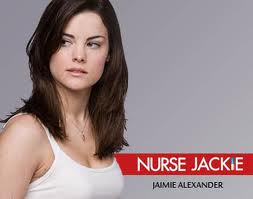 "Nurse Jackie" Episode 3 Play Me Air Date—11 April 2011
Much to Jackie's surprise, Kevin's younger sister, Tunie, shows up in the girls' bedroom, freshly hungover and tragically heartbroken after being dumped by her pilot boyfriend. On their way to work, Jackie tells Eddie she thinks Kevin installed Tunie to monitor her in the wake of his intervention. Lenny prepares Zoey a romantic picnic lunch only to crack her tooth when she bites into a sandwich where he's hidden his house key. Zoey talks things over with God, who's set up a makeshift piano bar in the ambulance bay. At the hospital, a Jewish Orthodox husband fights with his in-laws to have his critically injured wife moved to Beth Israel for a necessary operation. Later, bedlam ensues in the ER when two street meat vendors are brought in after a comically brutal turf war.
Posted by Calling All Saints - Nurse Jackie Fancast at 2:48 PM